Supported in part by funding from the Erie Canalway National Heritage Corridor and Parks and Trails, New York

Quiet as a Mentz Church Mouse

We all listened intently yesterday to the talk given by Linda Frank, Cayuga County Historian, titled “Of Many Voices,” held at the Historic Mentz Church. The program was jointly sponsored by Lock 52 and Montezuma Historical Societies. Even a quiet resident church mouse on the front step went unnoticed by our guests as Linda spoke about the Abolition Movement in Upstate New York between 1830 and the start of the Civil War.   I couldn’t help but wonder how people’s lives who lived nearby, and now buried in the Mentz Church Cemetery outside the church were touched by the events and conflicting opinions leading up to the Civil War in this area.

Montezuma and Mentz were still very much  frontier towns during the early Erie Canal years, and

professional and established clergy were scarce. Many of the self-taught people and evangelists achieved many converts to Protestant sects, such as Congregationalists, Baptists and Methodists resulting in a religious revival that influenced strong and often conflicting opinions on the issue of slavery.  The term “burnt district” was coined by Charles Finney, to denote an area in central and western New York State during the Second Great Awakening. He felt that the area had been so heavily evangelized as to have no “fuel” (unconverted population) left over to “burn” (convert). * The Religious revivals during this period intensified anti-slavery activity after 1830. Seeking to perfect society, adherents targeted slavery as an evil that destroyed individual free will as moral beings.

ogram, the winner of  a quilt made by the Heart to Hand Quilt Club to benefit the Weedsport Library called, “Kisses From Your Beloved,” was drawn. It went to a good home, someone who will appreciate the story of how the quilt blocks were designed based on love letters of a couple during the Civil War. Linda Frank, pictured here in the cemetery, and our guest speaker, won the quilt. The quilt sampler, made with replica Civil War fabrics was based on a book written by Quilt Designer, Jody Barrows from Civil War letters she researched.

Following the program refreshments were enjoyed provided by Lock 52 Historical Society on the church lawn next to the graves of so many during this time of history. The program was part of the New York State Path Through History program. It was sponsored in an effort to jointly support historical and cultural programs shared by a common theme for both groups. Even one of Thomas Jefferson’s favorite cookies, Hermits were served.

Prior to the start of the program election of officers was held by the Montezuma Historical Society. Edward Laraway stepped down after serving several years as President, and Mellony Carner took over his leadership position. Kathleen Decker was elected Vice President, and Shirley Gillmore came on board as a new Trustee. Re-elected were Barbara Black, Treasurer and myself as Secretary. Other trustees continuing to serve on the Board are: Jim Decker, Paul and Bunny Baker, Ed and Cynthia Laraway, Stan Longyear, and Bob Melvin. 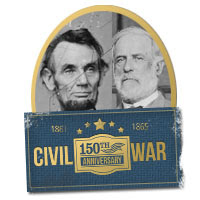 To follow up with the Civil War commemorative theme, mark your calendars for our September 7th program that will center around  a historic Crazy quilt made in the late 19th Century by Charolotte Salvage. The program will be part of a continuing series, “If This Quilt Could Talk.” I fell in love with the equisitely designed embroidery work in this quilt at the Weedsport Library Quilt Show last year, and became even more curious about the history behind the quilt. I’ve researched several of the crazy quilt patches that include commemorative ribbons of the Auburn Seward and Crocker Chapters of Grand Army of the Republic (G.A.R).  Pat Kimber from the Frontentac Museum has been very helpful with the research found that Charlotte’s daughters, Sarah (never married) and Mildred (married at age 80), were servants to the Case Willard families in Auburn.  Angie Vitale, the present owner, is donating the quilt following its showing to the Frontenac Museum in Union Springs where it will return to the area where the quiltmaker, Charlotte and her family lived.